Departure Day in Egypt? The only one who doesn't want Mubarak to go is the president himself 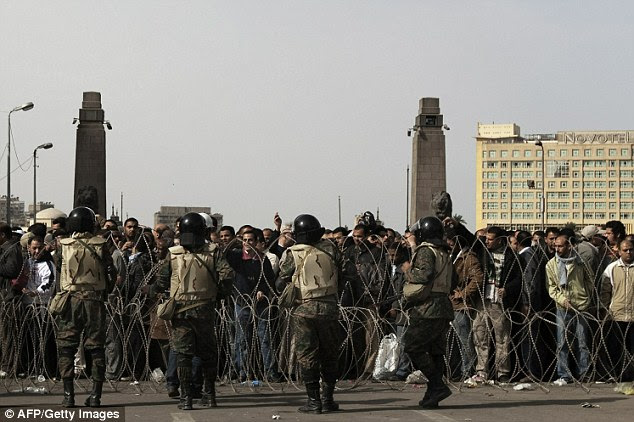 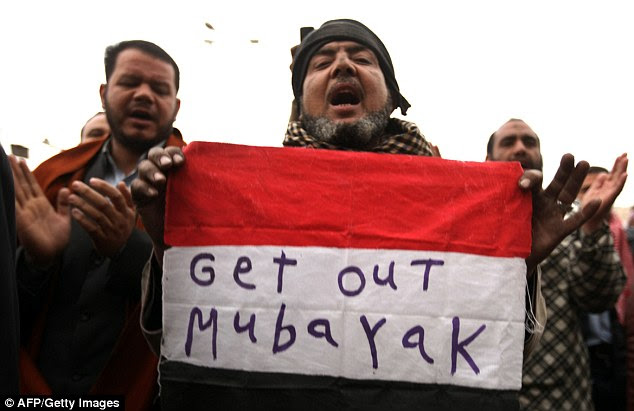 Egyptian protesters trying to topple the regime of President Hosni Mubarak have called on supporters to fill every square in the capital today.

The call follows two days of vicious street battles between pro and anti-government camps that marked an ugly turn in the country's crisis.

The military guarded thousands of protesters as they poured into Cairo's Tahrir Square this morning for 'Departure Day' - as the clamour for Mr Mubarak to step down intensified.

Defence Minister Hussein Tantawi and senior army officials visited the square in a sign that Egypt's most powerful institution was sanctioning the demonstration.

Soldiers checked IDs and performed body searches at entrances to the square.

Omar Suleiman said: 'When there are demonstrations of this size, there will be foreigners who come and take advantage and they have an agenda to raise the energy of the protesters.'

The government has accused media outlets of being sympathetic to protesters, who want the president to quit now rather than serve out his term as he has vowed to do.

The U.S. has been in talks with top Egyptian officials about the possibility of Mr Mubarak resigning immediately and the formation of an interim government that could prepare the country for elections later this year.

A military-backed caretaker government is one of several ideas being discusses as the anti-Mubarak protests escalate in the streets of Cairo and other cities, officials said.

Another option is for Mr Mubarak to resign and cede power to a transitional government run by Mr Suleiman.

White House national security spokesman Tommy Vietor said: 'The president has said that now is the time to begin a peaceful, orderly and meaningful transition.

'We have discussed with the Egyptians a variety of different ways to move that process forward.'

Mr Mubarak, 82, told ABC that he wanted to resign, but he feared the country would sink into chaos if he did so now.

'I do not want to see Egyptians fighting each other,' he said.

Soldiers, mainly protecting government buildings and important institutions, have remained passive since replacing the police on the streets a week ago.

Pro-government mobs beat foreign journalists with sticks and fists yesterday. The Committee to Protect Journalists said 24 reporters were detained in 24 hours and 21 were assaulted.

One Greek journalist was stabbed in the leg with a screwdriver.

Human rights activists have also been targeted. Military police stormed the offices of an Egyptian rights group and arrested at least 30 people, including two from the London-based Amnesty International.

The crisis began on January 25 when protesters launched the biggest challenge to Mr Mubarak's 30-year rule.

Yesterday, the day after Mr Mubarak refused to step down, thousands of his supporters attacked anti-government protesters in Tahrir Square.

His supporters started fierce battles with firebombs, machetes and chunks of pavement that lasted throughout the night and all day yesterday.

At least eight people have been killed and around 900 injured in the two days of fighting around Tahrir.

Under intense international condemnation, the government has offered more concessions to the protesters, but that did nothing to calm the anger.

The anti-Mubarak movement has vowed to intensify protests to force the president out by today.

A Facebook page that started the protest movement told supporters to gather in all Egyptian squares at noon 'so that we can put the last nail in the regime's coffin and declare the victory of the January 25 revolution'.

An exodus of foreigners has continued in the country, with the UN evacuating much of its staff.

One million tourists are believed to have now left the country. 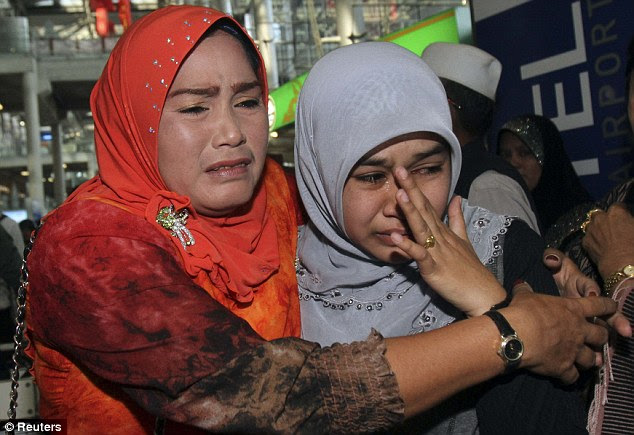 Exodus: A Thai citizen weeps after she was evacuated from Egypt. The protests have seen thousands of tourists flee the country 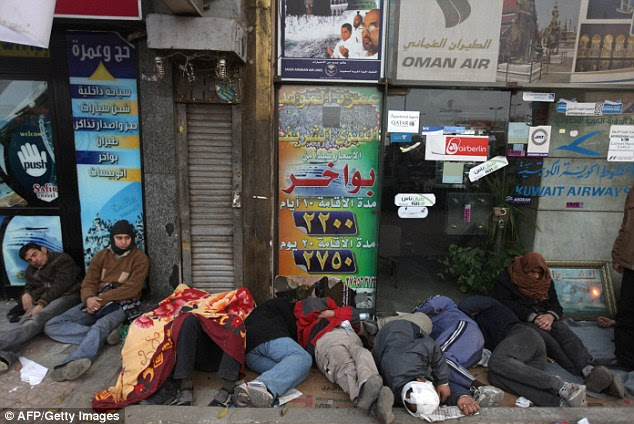